Horia’s recent visit to the island of Santorini included a fascinating vertical of Domaine Sigalas’s flagship dry white, showing the Assyrtiko grape’s high potential to evolve and improve with age. It was a tasting full of surprises. 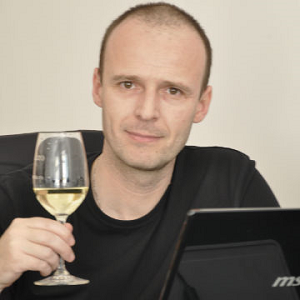 Horia Hasnas is a Bucharest based wine writer. He has an extensive knowledge of Romanian wine, and travels frequently in South East Europe, notably in Greece.

It’s a wonderful experience… beating the brakes off a Fiat 600 on volcanic roads. And, when you’re on a 12% slope and you manage to overtake an elderly man on a bike, the satisfaction is out of this world. The important thing was that I got to Sigalas and I had an experience! A Santorini vertical that took me back to 2003. Without beating around the bush, I’ll tell you that Santorini Sigalas is a one-hundred per cent Assyrtiko that, after alcoholic fermentation, spends six months on yeasts. And it comes out at around 14% alcohol by volume.

I didn’t only limit myself to these wines. I told stories alongside Paris Sigalas, time in which I took joy in a Mavrotragano 2015, a Cavaliere 2015 and 2014, a Roptro 2013, an Aidani demi-sweet late-harvest, with three years of wood and two more in a bottle. And I also tested the wines which, in Paris’ opinion, will assure the survival of the winery in a pretty muddy period. Cabernet Sauvignon and Syrah, both from 2018, both made by grapes coming from the continent. The wines will be on the market in 2020. We’ll talk more about them then…