Cantina Mascarello Bartolo is one of the great names of Barolo. This small estate has been producing iconic wines for decades.

Founded in 1918, Cantina Mascarello Bartolo is one of Barolo’s impressisve list of longstanding and highly respected producers. Its history can be traced all the way back to the chaotic aftermath of the first world war. With the local cantina sociale di Barolo in disarray, Giulio Mascarello decided to go alone, bottling and selling wines from his own vineyards.

The family is steeped in history. Giulio was named the first post war mayor of Barolo and with so many of the later wines featuring memorable slogans such as ‘no Barrique, no Berlusconi’, politics has arguably never left the family.

When his son Bartolo took over the business in 1982 he decided to alter the name of the business. There were two factors at play. Bartolo had built a good reputation locally. He had worked hard to build a good name for himself and his wines were in demand. He felt adding his name to the company would provide an important differentiation in a local wine scene that quite by chance already had its fair share of Mascarellos. The final straw came during the infamous methanol scandal (many producers were caught adding methanol to their wines) and a Mascarello family was implicated. Bartolo added his name to protect the company and reassure people of what they were buying.

Following the death of Bartolo in 2005, his daughter Maria Theresa took over and embarked on continuing the work and philosophies her family had become famous for. Sadly my foray into the world of wine did not bring me here to the region in time but by all accounts Bartolo was a great man; his work and commitment to quality is revered throughout the wine trade. Neverthless, Maria Theresa’s first vintage was in 1993. She worked closely with her father for almost a quarter of a century before taking the helm. Production remains low. Across the range the Bartolo Mascarello brand produces around 30,000 bottles a year.

The estate now comprises parcels of vineyard in four different cru territories within the Barolo DOCG, the most important of which is the single hectare in Cannubi. They also own 1.2 hectares in Rocche dell Annunziata, 0.3 hectares in San Lorenzo and 0.5 hectares in Rue.

Cantina Mascarello Bartolo are clearly one of Barolo’s traditional producers. Yet, the widespread practice of vinifying and bottling individual parcels of wine that became fashionable around the middle of the 20th century was never pursued. Instead, Guilio blended the wines made from each of his three vineyards, and later a fourth when he purchased Rocche dell Annunziata in neighbouring La Morra. His son Bartolo continued this practice, and Maria Theresa is also committed to maintaining this family tradition of pursuing balance and harmony through blending. 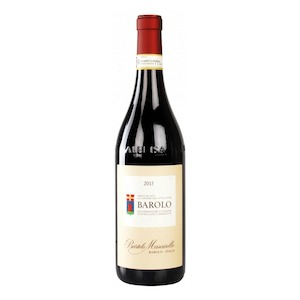