Château Gloria is one of the key estates in Bordeaux’s left bank appellation of Saint-Julien AOC.

Chateau Gloria is one of the great estates of Saint-Julien AOC in Bordeaux. Although it does not carry the lofty recognition of the 1855 classification, it is an estate that is well known for consistently producing wines that outperform some of its more prestigious neighbours.

The property was acquired in 1942 by Henri Martin, a young cooper at the time. Over the years he started to purchase small plots of vines from classed growth properties such as Gruaud-Larose, Talbot, Lagrange and Léoville-Barton. By 1965 Chateau Gloria consisted of fifty hectares in various parts of the appellation.

Henri passed away in 1991 and the estate and its winemaking is now under the guidance of his son-in-law Jean-Louis Triaud. The wines are generally a blend of 65% Cabernet Sauvignon, 25% Merlot, 5% Cabernet Franc and 5% Petit Verdot, aged in a combination of large and small oak barrels (50% new).

Its reputation has been built on consistently producing wines with a rich, blackcurrant fruit-driven nose and a velvet textured palate. Like many other wines from the left bank of Bordeaux, vintage variation is an important factor, but the wines of Château Gloria drink very well between seven and twelve years from the vintage. 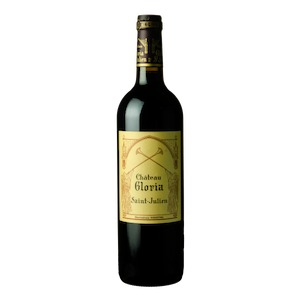