Elevated to First Growth status in 1973 (the only change to the 1855 classification), Château Mouton-Rothschild is a prestigious wine estate in the Pauillac appellation of the Médoc. The property’s ninety hectares, roughly fifty kilometres northwest of Bordeaux, are renowned for producing powerful, elaborate wines with a complex range of aromas.

Like the majority of properties in the Médoc region, Mouton benefits from the natural advantage of its location between the Atlantic Ocean and the Gironde estuary, and the mild, moderated climate which it is henceforth afforded. The Mouton estate - unsurprisingly, given that the name Mouton is derived from the French word Motte, meaning mound - comprises a series of gentle hills with flatter areas of land in-between. Deep, gravelly soils of sand and clay on a clay/limestone base, ensure free, natural drainage, and the shallow slopes (extending to heights no greater than forty metres), give excellent exposure to the sun during the growing season.

The vineyard is made up of key red grape varieties most typical of left bank appellations, and is planted to a density of 10,000 vines per hectare. Cabernet Sauvignon accounts for four fifths of the area under vine with Merlot constituting much of the remainder, and there are smaller quantities of Cabernet Franc and Petit Verdot. The composition of the wines of course varies with each vintage, although Cabernet Sauvignon is always the dominant grape in the blend, giving the wine the tannic structure, aromatic complexity and ageing potential for which it is acclaimed. A tiny area of vineyard is also reserved for white varieties - Sauvignon Blanc, Sémillon, Sauvignon Gris and Muscadelle - for inclusion in the estate’s white blend which is sold under the Bordeaux AOC label.

As one has come to expect from the top estates, every step of the cultivation and vinification process at Château Mouton-Rothschild is carefully considered in what is a meticulous operation from vine to wine. Grapes are de-stemmed following harvest before being stringently sorted by hand. They are then transferred to vats under the action of gravity alone, for fermentation to begin. Two thirds of the Mouton vats are made from oak; the remaining third from stainless steel, and each is different in size to correspond with the specific parcels from which the grapes are drawn. Following vinification, the wines are left to mature in new oak barrels for around twenty months, during which time, traditional egg white fining is used to reduce astringency.

In addition to the much heralded Grand Vin, Château Mouton-Rothschild produces a second red blend, Le Petit Mouton de Mouton Rothschild from some of the estate’s younger vines, and a white wine, Aile d’Argent (Silver Wing) - usually from a blend of Sauvignon Blanc and Sémillon.

Renowned also for its collection of art which is housed in a former barrel hall, Château Mouton-Rothschild has a tradition in label design which has seen such famous artists as Salvador Dali and Pablo Picasso produce its bottle images. This convention, along with the unique flamboyance of the blend, has helped to establish Mouton amongst the world’s most expensive and collectible wines. 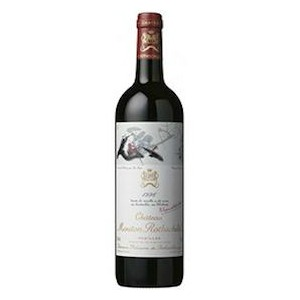