By the consensus of consumer, collector and critic opinion, Bordeaux estate Château Pétrus is viticultural royalty. A well documented favourite of President Kennedy and wife Jacqueline, the ‘celebrity wine’ of this property is renowned for its poise, its texture, and its remarkable longevity.

Situated in Pomerol - close to the Saint-Émilion border, Château Pétrus is the flagship of the appellation and is widely regarded as producing amongst the very best red wines of the region. Unquestionably, part of its appeal is its size. Minute in comparison with some of the region’s other acclaimed properties, the estate - at a fraction over eleven hectares - retains a distinct rural charm and almost unassuming profile, that distinguishes it - and Pomerol as a whole - from the grandeur of the renowned Médoc Châteaux. Nevertheless, Pétrus is rightly ranked amongst the world’s wine elite and regularly fetches prices in the tens of thousands for its most celebrated vintages. Its diminutive size and hence the relative rarity of its wine (Pétrus generally produces no more than thirty-thousand bottles each year) contributes to its value on the secondary market.

Originally an estate of just seven hectares, Château Pétrus grew to its current size in 1969 when a parcel of Château Gazin was purchased from its neighbour. Yet it was twenty-four years earlier, in 1945, when Marie-Louise Loubat became sole owner and her partnership with distributor Jean-Pierre Moueix was established, that the estate and its wine began to build its international reputation. By 1969, following the death of Madame Loubat some eight years earlier, full ownership of the estate was in the hands of the Moueix family where it remains today, albeit with a 20% share of the capital held by billionaire investor Alejandro Santo Domingo.

The position of the vineyard and the composition of its soils are integral to Pétrus’ uniqueness. Seated on a plateau in the eastern part of the appellation, the vineyard enjoys excellent exposure to sunshine. Its clay soils date back some forty-million years and include a stratum of Crasse de Fer which distinguishes the estate’s terroir from the more typical - and much younger - gravel of the surrounding properties. Until 2010, the vineyard comprised of 95% Merlot and 5% Cabernet Franc. However, for the last nine years, the vine, and hence the wine have been mono-varietal Merlot, which owing in part to the age of the vines (forty-five years) delivers a richness atypical of the variety.

The wine itself is the result of both the fantastic terroir of the Pomerol plateau and the attention to detail taken by the team (led by Oliver Berrouet) at every stage of the wine-making process. Grapes are picked by hand - usually within a single day, then de-stemmed, sorted and crushed before the vinification begins. Maceration in concrete (normally between two and three weeks) is followed by malolactic fermentation, after which a stringent taste test is carried out and only vats deemed of the highest quality are permitted for inclusion in the ‘Grand Vin’. The accepted samples are blended then aged in 50% new French oak barrels for between twelve and eighteen months and filtered before bottling. The resultant wine is one of unique character and opulence. Critics advise waiting for between ten and fifteen years before consumption, but the greatest examples of Pétrus can age well for more than half a century.

A name synonymous with quality and societal status, Pétrus’ fame continues to grow. Latin for Peter - the saint who guards the gates of heaven, here on the iron-rich blue clay of the Pomerol plateau, the name Pétrus points to heaven of a different kind - a liquid heaven for the senses, a heaven known by so many but experienced by so few, a heaven whose rich complexity and incredible harmonious structure has, over the last sixty or seventy years, propelled it from relative obscurity to the very top of the world’s wine list. 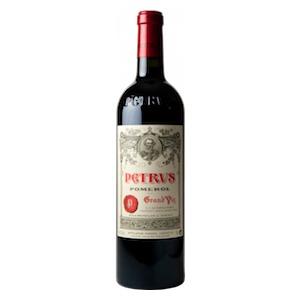