Caprettone is a white grape variety found in Campania, particularly the volcanic soils of the Vesuvius national park. It is used primarily in the Lacryma Christi style wines of the Vesuvio DOC.

For many years Caprettone was considered to be a clone of Coda di Volpe, one of Campania’s secondary white grape varieties. DNA analysis has proven the two to be distinct, a finding that will hopefully benefit both in the long run. As a consequence, there is very little reliable information about how much Caprettone is actually planted. Additionally, understanding the true picture could take several years due to the historic tendency to plant the two varieties together.

In the vineyard they look similar, although knowing there is a distinction allows us to easily identify Coda di Volpe’s ‘fox tail’ appearance. Its large compact berries contrast with the smaller ones of Caprettone.

The Caprettone we know about is receiving increased attention from a new generation of producers who are keen to follow the general trend of rescuing and showcasing indigenous grape varieties. Along with Catalanesca, it is considered an important component of white wines made in the Vesuvio DOC. Even in the blended Lacryma Christi whites (now part of the same Vesuvio appellation), Caprettone is becoming more prominent.

Its natural acidy is also being harnessed to create sparkling wines. A number of producers are experimenting with Caprettone as the basis for both charmat and traditional method spumante. Casa Setaro make an example worth tracking down.

Featured wines made from Caprettone 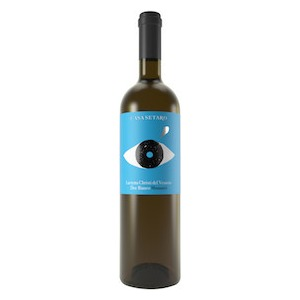 Cantina del Vesuvio is situated close to Naples and produces a range of wines from the typical grape varieties of Campania, notably Caprettone and Piedirosso.

Tenuta delle Ginstre produce wines in the Vesuvio DOC and are known locally for their cultivation of the interesting Caprettone grape.

Casa Setaro is a small producer of about 10 hectares located in the Vesuvio national park in Campania. It is known for producing Lacryma Christi wines within the Vesuvio DOC.