On a site that is shown to have produced wine since Roman times, Château Pavie is one of Saint-Émilion’s oldest and most acclaimed producers. Promoted to the highest echelon of classification in 2012, the thirty-seven hectares under vine here form one of just four estates in the appellation with ‘Premier Grand Cru Classé A’ status.

Owned since 1998, by former professional cyclist Gérard Perse, the estate benefits from fantastic terroirs, a favourable aspect and the natural drainage of its elevated position. Situated southeast of Saint-Émilion village, on the famous limestone plateau, Château Pavie’s vineyard comprises 60% Merlot, 25% Cabernet Franc and 15% Cabernet Sauvignon. Its Grand Vin - and its second wine, Arômes de Pavie - are a blend of all three varieties, the exact proportions of which vary with each vintage.

There are three distinct terroirs here that lend themselves to the cultivation of these three grape varieties. The first is the plateau itself - Merlot parcels thrive in cool, moist soils and this shelf of clay limestone provides perfect terroir for a variety that brings colour, charm and roundness to the finished wine. The second is the hillside - the upper slopes of the vineyard are dominated by a fine-textured clay limestone soil to which the Cabernet Franc and Merlot varieties are well adapted. The third is the terroir of the lower slopes - both Cabernet Franc - which contributes power and finesse to the blend - and Cabernet Sauvignon, flourish in the large grain, sandy clay soils at the bottom of the Pavie vineyard. Although, the least planted of the varieties, Cabernet Sauvignon is nonetheless important for its role in adding tannic structure to the wine.

Château Pavie adopts the same meticulous approach to its cellar as to its vineyard. Yields are kept low, the harvest is dictated by the ripeness of the fruit and the exact vinification processes vary depending on the characteristics of the vintage. The winery was subject to a complete renovation soon after Gérard Perse took control, and again a decade or so later, with the current facility - inaugurated in 2013 and designed by architect Alberto Pinto, considered one of the appellation’s most state of the art. Cellar master Jean-Baptiste Pion and consultant oenologist Michel Rolland, together with a team of experienced cellar workers, strive to deliver a unique expression of Château Pavie’s terroir every year.

The Grand Vin is characteristically deep in colour, intense and powerful, yet also elegant and refined. The estate produces around 70,000 bottles of its flagship wine each year with the best vintages requiring a prolonged period of ageing to be enjoyed at their finest. Experts recommend ten to twelve years at a minimum, but many vintages will continue to mature for half a century or more. Approximately 30,000 bottles of Arômes de Pavie are also produced. Made from the fruits of the estate’s younger vines, as well as from barrels that didn’t make the cut for the Grand Vin, Château Pavie’s second wine is itself a first class blend of Merlot, Cabernet Franc and Cabernet Sauvignon. 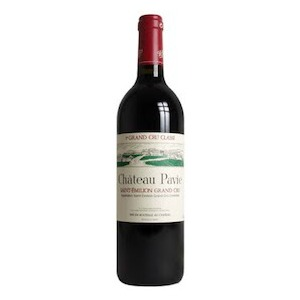