The château itself was created in the 17th century and like many other estates at the time, went about its business making well regarded wines. It was with the advent of the 1855 classification though that Sigalas Rabaud came to prominence. Along with 10 other properties, Sigalas Rabaud was rated as a first growth and has enjoyed the benefits of this lofty position ever since.

In 1863 Henry de Sigalas acquired the estate. Forty years later his son Pierre Gaston de Sigalas took over the property, which came with a small chateau and on the south facing hill, a small farm. Choices were made and it was decided that the chateau and some of the north facing vineyards would be sold off, while Pierre would keep just 14 hectares which included the farm buildings we see today.

Time would ultimately prove it to be a shrewd move. The feeling was that he had kept the most important element of the estate, the south facing hill which comprised of mainly gravel but also very useful clay soils that sat just below the stones. It is this terroir that provides the key to understanding the freshness and minerality that now symbolises the wines Sigalas Rambuad.

Today this same hill covers 14 hectares of vineyard planted with Semillon and Sauvignon Blanc. The philosophy of Sigalas Rambaud starts in the vineyard. The soils are ploughed and although the estate isn’t organic, only a small amount of spraying takes place. Yields too are tightly controlled. The law in Sauternes permits nothing more than 25hl per hectare but here around 18 is the norm. The intention is to ensure that the good quality soils are handed down to the next owners.

It’s important for estates in Sauternes to offer a white wine, either to help importers make up orders or to provide a more diverse offering at the cellar door. Sigalas Rabaud are no different. They produce two dry whites (bottled as AOC Bordeaux) that feature Sauvignon Blanc and Sémillon kissed with a touch of oak.

The Grand Vin is aged in French barrique for at least 18 months under the guidance of winemaker Eric Boissenot. 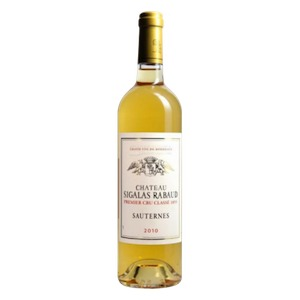 Sauternes AOC “Château Sigalas Rabaud” Premier Cru Classé
Château Sigalas-Rabaud, Bordeaux, France
2017 2013
Sémillon (85%)Sauvignon Blanc (15%)
“Glorious freshness. Delightful, uplifting notes of white peach, subtle, delicate marmalade and orange rind. There is a feeling of purity. It's light and exceptionally fresh, yet the natural sweetness is rich and luxurious but, and this is where it stands out as a world class wine, everything shimmers in perfect harmony.”
93 Paul Caputo