Château Gazin occupies an enviable position on the Pomerol Plateau, next to the esteemed Château Pétrus, and is notable as the appellation’s largest estate. Its soils are characterised by the günzian gravel and iron-rich blue clay that is typical of the eastern part of Pomerol and provides perfect terroir for the estate’s favoured Merlot grape.

In the hands of the Baillencourt family for more than a century, the passion for producing fine, seductive wines that are capable of ageing for many years has been passed down from generation to generation. And whilst Pomerol wines are not classified, it is widely accepted that Château Gazin ranks amongst the appellation’s elite. Now in its fifth generation, Laure, Christophe, Inès and Nicolas, along with winemaker Mickaël Obert continue to drive forward the Gazin brand, producing increasingly excellent wines including the exceptional vintages of 2005, 2009 and 2010.

90% of the vineyard is Merlot, 7% Cabernet Sauvignon and 3% Cabernet Franc, and the resultant wine comprises a similar make-up although the exact percentages vary with each vintage. Occasionally - as with the vintages of 2012 and 2013 - the estate’s Grand Vin is a mono-varietal Merlot, the unusual result of adverse weather conditions and a subsequent lower quality Cabernet harvest.

At Château Gazin, care and attention to detail is employed in abundance at every stage of the wine-making process, from the vineyard to the vat room to the cellar. Grapes are harvested by hand according to variety and parcel, sorted prior to de-stemming and then sorted again to ensure that only those of the highest quality are selected. Maceration in concrete for between fourteen and twenty-one days is followed by malolactic fermentation and a period of ageing in 50% new oak barrels, during which time the wines develop structure and complexity.

Produced in quantities of between 50,000 and 80,000 bottles per vintage, the ‘Grand Vin’ of Château Gazin delivers a charm and finesse synonymous with the finest Merlot-dominant blends. Rich in colour with a wide range of aromas and a solid structure, the wines can be enjoyed in their youth, but are usually worth laying down for between ten and twenty years to be appreciated at their finest. 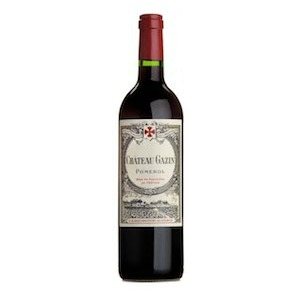